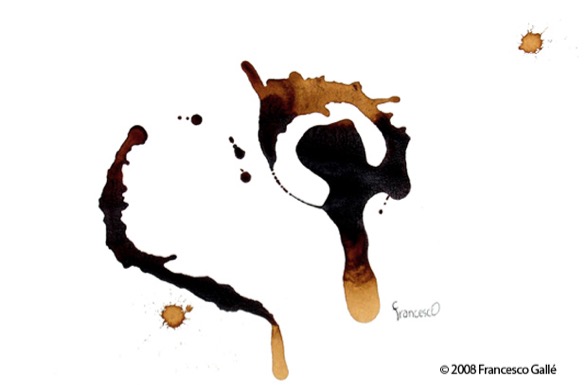 An Artist and His Mother – By Jon Sufrin

When Toronto-based artist Francesco Gallé sets out to begin a work of art, he often anoints the canvas with a pour of espresso. The resulting splashes of sepia, chocolate and auburn have become his trademark of sorts, but Gallé doesn’t use your standard, everyday espresso. This espresso has been lovingly brewed by his mother-who knows full well what he uses it for-and left to age for at least a year. Gallé’s pour is not standard, either. He releases it straight out of a jar, but it has to be done in a state of desireless relaxation. “When I’m too into it and trying to make it do something really cool, it looks bad,” he says. “It looks like spilled coffee.” And the artist doesn’t work in a characterless, rented studio, but rather the house he’s lived in since his family immigrated to Canada from Italy more than 30 years ago, in the room where he learned how to paint; the room where he’s spent countless hours meditating as part of his practice of Shambhala Buddhism. Gallé says the energy imbued by those elements – the coffee brewed out of love, the use of a sanctuary as a studio, as well as his mandate to let the art take a direction of its own – creates an extra-sensory aura in his work. “It’s that third element. You can’t touch it, you can’t see it. You can just feel it,” he says.   “When you see it on a canvas, it’s going to break your face. It’s going to break your heart, your soul.” A collection of Gallé’s new work will be exhibited at the Istituto Italiano di Cultura beginning next week. These works feature ethereal sketches of Italian icons – Sophia Loren, Luciano Pavorotti, and Federico Fellini, to name a few – intertwined with the espresso’s natural path taken across the canvas (he admits to slightly manipulating the coffee some-times). Some of the sketches are done in ink, where Gallé says he had to work regardless of whether he made a mistake, and some are done in lead, “because I’m losing my balls,” he explains wryly. The 42 year old, whose art has been displayed across Italy and in Toronto, is optimistic about showing his work outside the confines of a gallery.“The best art, as far as I’m concerned, is not contained at art galleries,” he says. While Gallé hopes that his exhibit will help people re-think the concept of modern portraiture, he is also cautious of being pigeonholed as the artist who paints with coffee; “I don’t want to become the Italian espresso guy who does Italian icons. Because I do a lot more.”