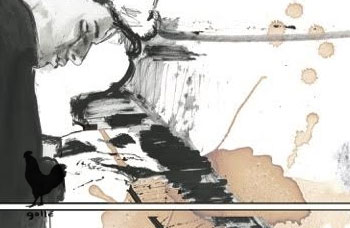 When it comes to Canadian musicians, you’d be hard pressed to think of someone more talented, successful, or lauded, both at home and abroad, than Glenn Gould.

When you watch him play, eyes closed, you can almost see him get in direct contact with the other side, with some otherworldly presence.

I sometimes feel that way when I’m painting, but it’s easier to get into that sort of state without having thousands of people staring at you.

When I was younger, I sang in a band.

There are some photos of me out there with much longer hair and much fewer years if you look hard enough.

At the time, I really looked up to Van Morrison – he was my idol. Watch this video of him below, from 1970.

He dove into his own world with such command, such authority – and he’s still got it too, if you watch more recent videos.

The fact that he managed to maintain that connection for most of the concert is amazing.

Compare that with a video of Glenn Gould pouring himself into his work, and you can tell that even though these two men are playing very different styles of music, they’re connecting to something similar.

God, source, the universe, spirit, whatever you want to call it.

I think when we can really connect to this, we can become a vessel for our deeper and higher selves, and I’m not alone.

Neil Young, Bob Dylan, Leonard Cohen, and many of the greats have talked about something similar.

It’s not as esoteric as it sounds – all we need to do is get out of the way of our own neuroses and our primitive instincts, our “monkey mind” as the Buddhists call it.

It’s that part of your mind that tells you what you can’t do, how you’re going to fail, how you shouldn’t even try.

Instead, if you can connect to the place that allows you to relinquish control, even for a few moments… that’s where the magic happens.

That’s where you can go on amazing journeys.

That’s what I wanted to tap into when creating this painting.

It was a proposal for the cafe bar at the Royal Conservatory of Music here in Toronto. 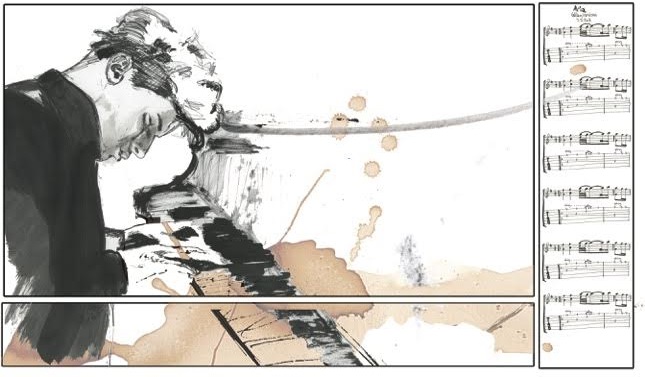 When creating this painting, I used my signature espresso and ink style.

If I captured even some of the intensity of his expression and the magic of his music, I accomplished my goal.

Included along the side is a hand-written version of one of the most famous pieces Glen Gould was known for, the Goldberg Variations of J.S. Bach’s Aria.

My original plan was to paint it on 3 boards due to the space available.

I think it would have come across nicely that way, but it didn’t work out.

Regardless, though, I had a lot of fun researching and painting this one.

Do you like this painting? Are you interested in purchasing a print? If so, visit my website where you’ll also find my other Canadian fine art works and Canadian art prints.

I also do custom work, so feel free to reach out about that as well, or even if you have any questions about my work.